The term " cigarette" has a FRENCH origin and means a cylinder of tobacco rolled in paper for smoking as it is commonly known, but can apply to similar devices containing herbs. 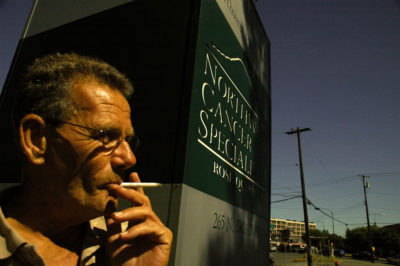 According to the World Health Organization, 26% of male deaths and 9% of female deaths can be attributed to smoking in the developed countries. Similarly, the United States' Centers for Disease Control and Prevention depicts tobacco use as "the single most important preventable threat to human health in developed countries and an important cause of premature death worldwide".

The main health hazards in tobacco pertain to diseases of the cardiovascular system, in particular smoking being a major risk factor for a myocardial infarction (heart attack), diseases of the respiratory tract such as Chronic Obstructive Pulmonary Disease (COPD) and emphysema, and cancer, particularly lung cancer and cancers of the larynx and tongue.

440,000 people die due to tobacco related diseases every day in US. To be more specific on that its about 1205 per day and undoubtedly it's the leading cause of preventable death.

The increased threat of contracting disease is directly proportional to the length of time of smoking as well as the amount smoked. However, if someone stops smoking then these changes start decreasing gradually as the damage to their body is repaired.

It becomes difficult for smokers to leave smoking inspite of knowing the ill effects because nicotine is addictive.

Nicotine is a strong stimulant that gives the feeling of enthusiasm after taking it due to the chemical reaction in the body of the person taking it. While smoking a cigarette although the amount of nicotine inhaled is quite small (because most of the substance is destroyed by the heat), its still sufficient to make you addicted for that. The amount of nicotine absorbed by the body from smoking depends on many factors, including the type of tobacco, whether the smoke is inhaled, and whether a filter is used.

Although nicotine does play a role in acute episodes of some diseases (including stroke, impotence, and heart disease) by its stimulation of adrenaline release, which raises blood pressure, heart rate, and free fatty acids, the most serious longer term effects.

In many respects, nicotine acts on the nervous system in a similar way to caffeine

Today, smoking - related illnesses among women and teenage girls is a full-blown epidemic. All smokers, irrespective of gender, suffer all the consequences of smoking such as increased cancer risk of the lung, mouth, larynx, pharynx, esophagus, kidney, pancreas, kidney, and bladder and respiratory diseases. However, there are numerous smoking-related health threats, which are unique to women. Certain cosmetic effects of smoking become evident in the short term.

The link between smoking and wrinkles has been known for years. Smoking switches on a gene involved in destroying collagen, the structural protein that gives skin its elasticity. Smoking also causes premature wrinkling of the skin, bad breath, bad smelling clothes and hair and yellow fingernails.

Smoking contributes to the development of osteoporosis-or bone density loss. Women are particularly at risk after menopause. Estrogen, produced by the ovaries gradually keeps calcium in the bones. After menopause, the ovaries produce less estrogen and the loss of calcium from the bone increases. Smoking is harmful to the ovaries and can result in a drop in estrogen. Smokers can have earlier menopause resulting in an earlier estrogen drop. Smoking also affects the glands that regulate calcium levels in the body.

Women who are already suffering from osteoporosis stress and leading to smoking cause metabolic disorders, leading to stress. Also improper diet, inadequate calcium intake, inadequate exposure to sunshine, decreased vitamin D, deliveries and lack of regular exercise are all contributory to the process of osteoporosis. Bone formation is less after 30 years of age. After menopause, there is highest breakdown of bone tissue-no osteoclasts (bone forming cells) increased osteoclasts (bone destroying cells) leading to increased osteoporosis. In addition to weaker bones the process of repair in case of repair in case of fractures is also affected.

Smoking directly affects a woman's reproductive organs and her reproductive health generally. Smoking has been identified as a risk factor for cancers of the uterus, cervix, and vulva and has been linked to breast cancer. It is estimated that 19 per cent of cervical cancer and 40 per cent of vulvar cancer are attributable to smoking. Women who smoke and are suffering from human papilloma virus infection are more likely to get invasive cancer of cervix. Those undergoing treatment of radiation for cancer of the cervix are more likely to suffer from small intestinal complications. A recent Australian study of more than 14000 women aged between 18 and 23 years showed that the risk of menstrual symptoms such as premenstrual tension, and a younger age of starting to smoke. There is increased risk of early ovarian failure and reproductive dysfunction leading to early menopause. Smokers are more prone to abortions, placental abruption. In older women, frequency, urgency and urge incontinence of urine is more likely in current smokers. Heavy smokers have increased incidence of macular degeneration leading to irreversible vision loss. Babies of smokers are low birth weight. There is a higher rate of stillbirths and a higher number of the infants die in the first year of life, as there is impaired lung growth and an increased chance of sudden infant Death Syndrome (SIDS). These children also are more likely to suffer from allergies and have asthma as also behavioral changes are seen in these infants. In the largest study of its kind, plastic surgeons found that smoking during pregnancy significantly elevates the risk of having a child with excess, webbed or missing fingers and toes.

Women who smoke are more likely to develop lung cancer compared to male smokers. Women also seem to need fewer cigarettes to do so. When it comes to chronic obstructive pulmonary Disease, current or former female smokers are much more likely than their male counterparts to have more vulnerable effects of tobacco on lung growth and function.

Women are working harder, smoking more and undergoing more stress, leads to the killer-heart disease. Women who smoke and those who use oral contraceptives, risk serious consequences including cardiovascular diseases such as blood clots, heart attacks, and strokes. Smoking greatly increases women's risk of heart disease and stroke. The threat for heart disease, among middle-aged women who smoke is triple that of middle-aged non-smoking women.

The evils of smoking are well known and acknowledged. A flash of happiness; an era of lament. Don't start, but if you already have, the best time to stop is now... start up with us to QUIT SMOKING...