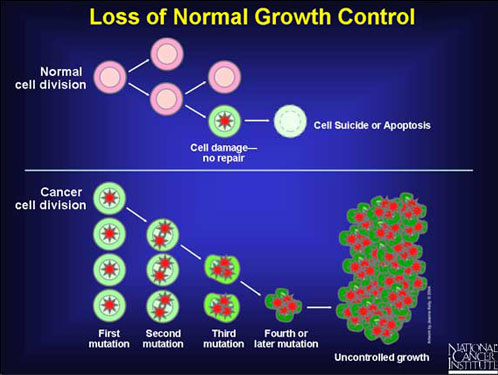 Cancer, the most dreaded disease, refers to all malignant tumours caused by the abnormal growth of a body cell or a group of cells. It is today the second largest killer in the world, next only to heart ailments. The term covers more than 200 diseases.

There are billions of cells in the body which, under normal circumstances, develop in a well organized pattern for the growth of the body and the repair of damaged tissue. When cancer sets in, a group of cells start multi­plying suddenly in a haphazard manner and form a lump or tumor; Cancer can spread very rapidly and eventually move fatal, if not treated properly and in time.

The majority of cancers occur in the age group 50-60, Sex does not determine the incidence of the disease though it does affect the site of growth. In men, cancer is usually found in the intestines and the prostate. In women, it occurs mostly in the breast tissues, uterus, gall-bladder and thyroid.

Causes And Symptoms of Cancer

The prime cause of cancer is not known. Certain cancer-causing substances, known as carcinogens, however, increase the chances of getting the disease. About 80 per cent of cancers are caused by environmen­tal factors. The consumption of pan, betelnut, tobacco and slaked lime has been linked with cancer of the tongue, lips, mouth and throat. Cigarette and cigar smoking and hukka puffing are linked with lung and throat cancers. Heavy consump­tion of alcoholic drinks can cause oesophagal, stomach and liver cancers. Occupational exposure to industrial pollutants such as asbestos, nickel, tar, soot and high doses of X-Rays can lead to skin and lung cancers and leukaemia.

Other factors contributing to cancer are viral infec­tions, trauma, hormone imbalance and malnutrition. Many well-known biologists and naturopaths believe that a faulty diet is the root cause of cancer. Investigations in­dicate that the cancer incidence is in direct proportion to the amount of animal protein, particularly meat, in the diet. Dr. Willard J. Visek, a renowned research scientist explained recently a link between excessive meat-eating and cancer. According to him, the villain is ammonia, the carcinogenic by-product of meat digestion.

The symptoms of cancer vary according to the site of the growth. The American Cancer Society has prescribed seven signs or danger signals in general which may indicate the presence of cancer. These are: a sore that does not heal; change in bowel or bladder habits; unusual bleeding or discharge; thickening or lump in breast or elsewhere; indigestion or difficulty in swallowing; obvious change in wart or mole and persistent and nagging or hoarseness. Other symptoms may include unexplained loss of weight, particularly in older people, a change in skin color and changes in the menstrual periods, especially bleeding between periods.

Cancers have a latency period varying from 5 to 40 years between the initial exposure to a carcinogen and the time the symptoms appear. In a large number of cases, either trivial symptoms are noted or there are none at all. One has, therefore, to be vigilant to recognise the first sign of the disease. The best way of diagnosing cancer is through a process called ‘biopsy’, in which a piece of suspect tissue is examined and tested under a micro­scope.

If you are suffering from CANCER and want safe and effective herbal medicines AND diet regimen. Please fill below form for Doctor’s online consultation.

Disease: Leucorrhoea Hi, my name is Olga Valentinovna and I am from Russia. I was suffering from a disease called Leucorrhoea. This disease was making me so uncomfortable all the time. Then one of my friends suggested me to consult Family Care Clinic in India that provides herbal treatment without any side effects. I wrote my problem to Family Care Clinic and I got prompt reply every time. They sent me the medicines by courier and on time. The instructions were sent along with the medicines and it was easy to understand. I followed them properly and took all the medicines in time. I could see the results that were impressive. Now I am absolutely fine and feel much happier about it.