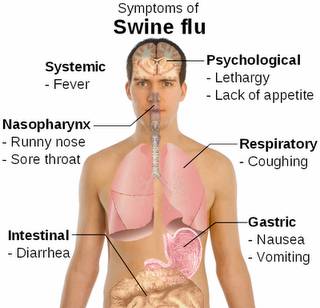 It is not just the people that get affected by influenza or flu, but pigs also get affected by flu. Their swine flu is not the same as human flu virus. Such swine flu will not infect people often and in rare cases where this virus was found in human in the past it was only present in the people coming in direct contact with pigs.

The new swine flu outbreak is not the same as the old swine flu and it is caused by the new virus which has changed in ways that allows it to spread from one person to another. Thus people who have not been in any kind of contact with pigs are also affected.

The new virus is a human flu virus. The CDC and the World health organization differentiate this virus from the virus found in the pigs and from the seasonal influenza A H1N1 virus which have been in the atmosphere for many years. The CDC recognizes this new virus as “novel influenza A (H1N1) virus” and the WHO calls it “Pandemic (H1N1) 2009.” They also call the swine flu illness as “H1N1 flu” and “pandemic influenza A (H1N1)” respectively.

What are the swine flu symptoms?

Every one that suffers from flu has at least two of these symptoms. At times these symptoms are caused by other conditions, so just based upon the symptoms it cannot be known that that the patient suffers from the swine flu. There are rapid flu tests offered by health care professionals, but if the test shows negative results then also it is not necessary that the affected person does not have the flu.

Pandemic swine flu can also cause neurologic symptoms in children, like seasonal flu. Such neurologic symptoms are rare, but can have severe and even fatal impact. The symptoms include seizures or changes in mental status such as sudden cognitive or behavioral changes. It is still not understood why these symptoms occur as Reye’s syndrome can also be the cause. Reye’s syndrome usually occurs in children who have taken aspirin during viral infection. Taking aspirin during the viral illness should always be avoided, especially for children.

Lab test is the only way to know whether you have swine flu or not and state health departments can do these tests.

Groups of people at highest risk from H1N1 swine flu:

Majority of the H1N1 swine flu cases in the USA have been in adolescents. The reason for this is not known and it is also not clear if this scenario will change in future. However, the groups that are at highest risk of severe outcomes by flu include:

All the people that fall in either of the groups mentioned above must get immediate medical care as soon as they get flu symptoms. Morbidly obese people are at higher risk of the infection, but obesity is not an issue. The explanation to extremely obese people catching swine flu is that majority of them suffer from respiratory problems and/or diabetes, and that can increase the susceptibility to influenza or flu.

How does swine flu spread?

It seems that swine flu virus spreads just like regular flu. The virus is taken up by directly from the droplets of the cough or sneeze of an infected person, by touching any object they must have recently touched, and then directly touching anywhere on your face especially, eyes, mouth or nose. That is why washing-hand is considered a good habit so that you can avoid delivering such germs to your own system and get infected. The infected people can spread flu germs from a day before the symptoms show and then till seven days after getting sick according to the CDC. This new swine flu virus is spread by people and not by the pigs, so the only way to get this infection is from another person.

How harsh is swine flu?

There have been many variations seen in the swine flu cases; some cases were mild while a few were fatal. Most cases in the USA were mild though there were a few deaths and a large number of hospitalizations due to this infection. Like seasonal flu there is a rare possibility of the children taking up neurological complications such as seizures and Reye’s syndrome.

Swine flu is more infectious to lung cells than seasonal flu viruses, but the good news is that swine flu virus is not well adapted to humans so it is hard to inhale it deep into the lungs.

Flu viruses tend to change at times and pandemic swine flu virus evolution suggests that it can also swap gene segments with other flu viruses. There is no such change detected yet, which is a good sign as the swine flu cases have been mild. It is also good for the swine flu vaccine, which is based on swine flu strains isolated early in the pandemic.

It is too soon for the scientist to say if the virus will become more deadly in future, they are keeping a close watch on this virus to see what formation it is taking. But the health experts warn that flu viruses are infamously hard to predict.

The best way to avoid swine flu is to maintain distance from the people that have any kind of flu symptoms. Home remedies to swine flu includes consuming vitamin C, garlic, basil and aloe vera, this will give you good resistance against taking the infection.

If you are suffering from SWINE FLU then take our safe and effective herbal medicines along with diet regimen. We also provide PRECAUTIONARY HERBS for SWINE FLU. Contact our doctors online by filling up the form attached below.

I regularly use Regrowth Hair Oil of Family Care Clinic. By using this herbal products I could see amazing results . My hair fall has totally stopped and have got new healthy hair growth IN BALD AREA .The quality of products are good . It gave new glamorous cosmetic look to my hair. I am well satisfied with products of Family Care Clinic. Thanks and God bless